“Algorythmically generated machine learned noise gig improves comprehensibility” claims the big wigs in the Meeedia! But we know this is hardcrafted incompetence this very Saturday! Zoinks! 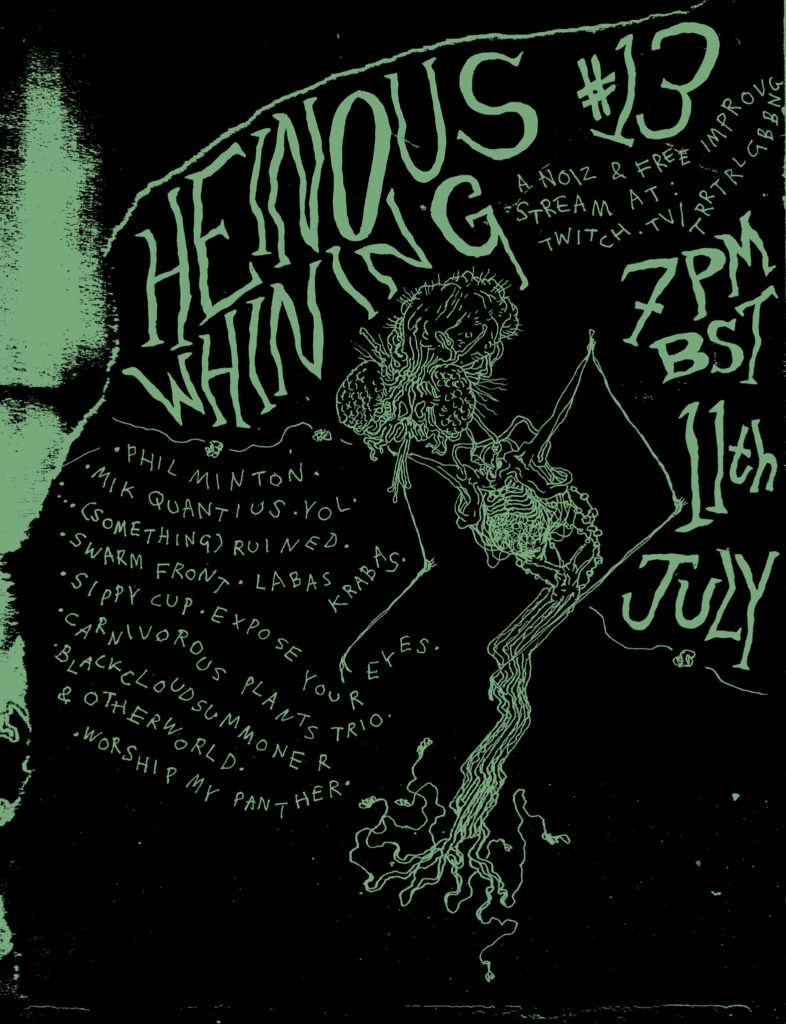 Was gonna insert a clever “we live inside a stream” Twin Peaks joke here but a good idea escapes me. Going to be running these streams fortnightly now to…
1) ensure quality
2) retain my sanity
3) cos I wanna
But we got a bumper lineup to reconcile ya Saturday woes (or whoa!s)
HERE: https://www.twitch.tv/trrtrlgbbng
Featuring:
Phil Minton – Feral vocal gymnastics and trickshots from long-time master of the gurp & slurp cheektwist and lung huff. If you google him google thinks he’s a jazz trumpeter which is kinda right if you have a right loose grasp on a trumpet..https://f-a-t-a-k-a.bandcamp.com/album/a-doughnuts-end
Mik Quantius – Weird messings with the object that is an instrument. Can it be mushed? Stacked? Petted? Squeezed? Crushed?? Yamaha keoyboard chance chords cacophonisings and vocal mystery stuff
Yol – It’s YOL! Yeah you know it! He’s on line!!!! Primeval holler and the biggest nails on the chalkiest board scrape n howl about Tescos meal deals other crushing banalities https://yolnoise.bandcamp.com/album/shit-holiday
Carnivorous Plants Trio – Carny Plants returns with a whole shrubsworth more of folks in tow. Blind jams meet in the middle into undoubtedly warm, dense malaise https://liquidlibrary.bandcamp.com/album/everything-is-always-real
… (something) ruined
– Finally some decent bloody humans powering the electronics. Fierce electronic skreeeee from Foldhead’s head head and righteous punching up from ‘loud poet’ Aural ‘Chris’ Aggravations https://humanworth.bandcamp.com/track/5-minutes-over-leeds-live-at-human-worth-iii
Swarn Front – TOPH dreamteam of Adam Denton, Mariam Rezaei and Mark Wardlaw speak sombre sounds and stretch and scratch electricity into a grey malaise. Entirely compos mentis free-fall-form https://tophgateshead.bandcamp.com/album/sear
Worship my Panther – Crunched keyboard preset disco rhythms and wiggles from one of the bones from Woven Skull https://hypnagogictapes.bandcamp.com/album/worship-my-panther-60-minutes-of-ecstatic-floor-fillers
Labas Krabas – Odie ji Ghast & Thomas Tyler use dictaphones, voice, guitar, mountain dulcimer, bells, electronics, tapes, miscellaneous objects & baby to tear a sizeable chunk out of your clue hole. Now you haven’t got a scooby what’s going on. Praise be! https://cadmustape.bandcamp.com/album/12daay
Blackcloudsummoner & Otherworld – Two masters of psyched out and big brain deep dark dirge and decay return to HW to team up and ride it out! Utter talents!! https://outletarchival.bandcamp.com/album/my-god-is-full-of-stars
Expose Your Eyes – Goold ol’ blown out too-much technicolour audio gristle from Paul Harrison. Whiggin’ it from minimal to maximal https://aphelioneditions.bandcamp.com/album/brain-pan
Sippy Cup – Absolutely free music. Anything to hand racketeering into ecstatic full-play colourful joy shit. Squeaky toys and drums? Guitar and a lightswitch? https://sippy-cup.bandcamp.com/
+ more TBA
https://www.facebook.com/events/277278143482188
Posted in Uncategorized | Tagged Mik Quantius, Online evenement, Phil Minton | Leave a comment

The finest in chaotic noise and experimental music delivered direct to ur device. (S.I.Y)

Big recommendation from us for tonight:

Iso Mass is back! 8th edition tonight with some real STARS. The finest in chaotic noise and experimental music delivered direct to ur device.

ALSO , this record is finally out. or digitally anyway, does that count ?

Roro opened up a 6 week tour for EARTH doing a duo with master musician, master mind and master friend Don McGreevy. We didn’t have anything prepared really, we jammed twice before the first show. And post tour we had too much coffee and recorded this in Amsterdam. It sounds like a long time ago. But everybody is living in the past anyway, right ?
Have a listen:

In 2018 Carlas and Cywits debuted with a cassette release for the Dutch Plattegrond Records. I remember being pleasantly surprised and impressed by their strange opera-like music. With their new album ‘3n6463m3n7 dr1v3r’ – a digital-only release for Toztizok Zoundz – this Amsterdam-based duo continues on this path and further explore and deepen their operatic and semi-orchestral music. Maria Carlas (real name: Carla Genchi) is a classically trained vocalist from Italy. She studied at the Nino Rota Conservatory in Monopoli. Cywitz is a singer and composer of German origin, and that is about all I know from his background. Vocals function at the centre in their dramatic musical constructions, ranging from operatic singing to sprechgesang in Dutch, English or French. Sometimes they sing with their natural voices, sometimes they are manipulated. Consequently embedded in a weird instrumental environment of electronics and acoustical instruments (keyboards, synth, sampler, mandolin, glockenspiel, etc.), that suggest orchestral proportions. Their very outspoken and bizarre musical compositions can be situated somewhere between audio play and music. It all sounds very determined and worked out. In live settings, visuals and costumes complete their theatrical concept. But also without these aspects listening to their playful music is very rewarding. (DM) 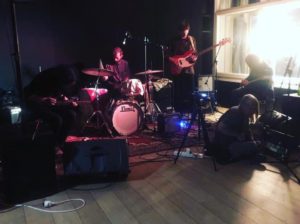 20GUILDERS (Mitsuru Tabata/Junzo Suzuki) proudly announced our upcoming spring JP tour with living legend MIK QUANTIUS OF EMBRYO!!!!! off course, this time is the first time touring in japan for mik ever!!! hope japanese heads digs Mik’s crazy/fantastic/magical art/music!! whole tour dates are below. also, this time is the longest tour in this country for us!! stay tuned/stoned!! Mikkii und Stephen are on the road again!!!

The Marshmallow Experiment will have its premiere in Villa K next week, exciting!

You’re all welcome to join us for an evening with extraordinary vocal performance, DIY cyber-punk post-apocalyptic armors, speculations of the real, and the Marshmallow experiment!

△ Mik Quantius
“The magic that is Mik Quantius”, probably the best description for musician/vocalist from Germany, known for being a member of krautrockband EMBRYO but since a couple of years also performs extraordinary solo sets, playing the space and the moment, improvising with keyboards and his own body as instrument, make sure you don’t miss this.

ToxiCity is a collective performance and on-going project that collects and maps air toxicity levels in different cities. For this purpose, several speculative bodies, human-trash hybrids in a “DIY cyber-punk post-apocalyptic” armor, wander the city sensing the atmosphere around them and reacting to it by triggering oscillating sounds mediated by DIY electronics and open-source software. Through the projection of a body that enunciates the unseen constant air pollution that surround us on a daily basis, – and thus, making it a common ground for every being in the planet –, there is an attempt to criticize the techno-fixes our petrol fueled societies rely on today to extend our lives in this sick capitalist system by creating a scenario of confusion and noise that reflect the intensity of pollution. ToxiCity reflects on the human condition, on our collective effort and actions to remain alive, in an attempt to question our ways to cope with climate change and natural imbalance.

Xavier Paes is an emergent Portuguese artist working within the indefinite fields of visual arts, sound and performance, being also part of the Porto based artist collective Favela Discos. A devote practitioner of the zenoise buddhist philosophy and the arts of divinatory alternative realities, in a continuous speculation of the real through concepts like acoustic phenomena, repetition, sympathetic frequencies and resonant bodies, having improvisation, gleaning, activism and multi-instrumentalism as the most present tools in his practice, exploring and potentiating different approaches to the ideas of body and space through the use of daily life objects, electronics or whatever he can lay is hands on. Then back to Berlin, where me and Agne are presenting a new dance piece at Lake Studios Berlin where we have been working for the past month.
Friday 6th & Saturday 7th: Double Bill: Grace Euna Kim & Agnė Auželytė x Stephen Doyle Supported by Senate Department for Culture and Europe. 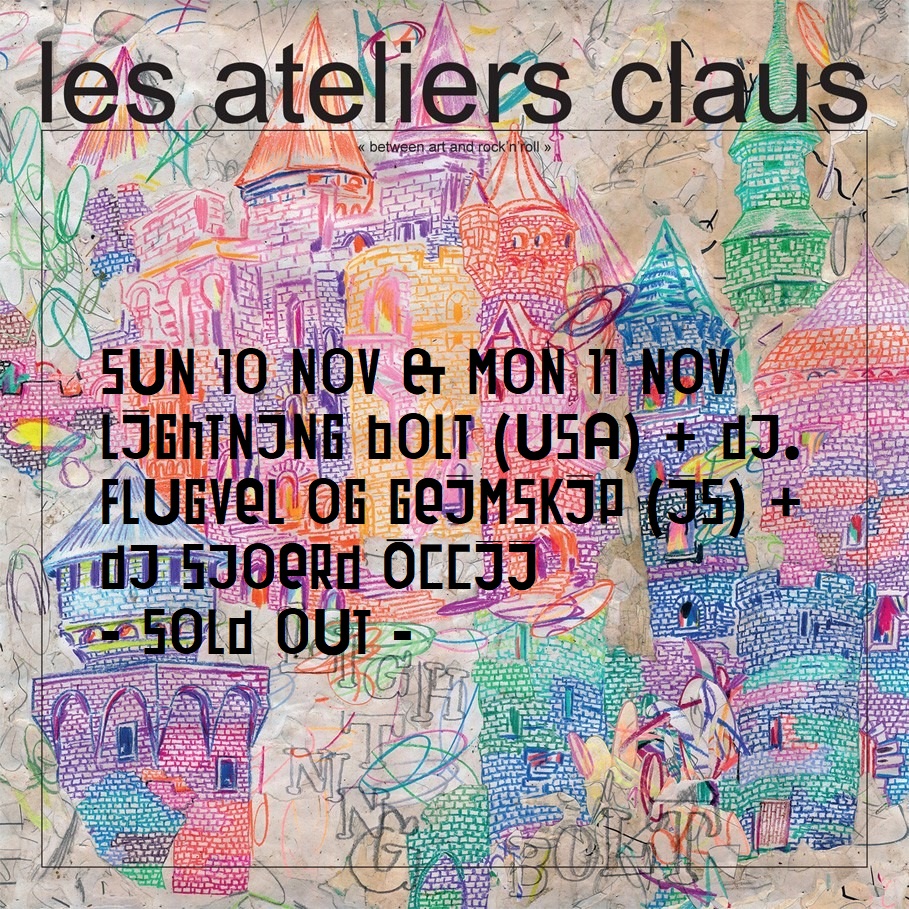 For 25 years already Brian Gibson (bass) and Brian Chippendale (drums, vocals) have been making artistically approved musical violence under the name Lightning Bolt. The duo have their crusty headquarters in an industrial squat in Rhode Island – at walking distance from the art school were they first crossed paths – where they improvise/compose noise punk as if it were pop music. Famously playing in front of (rather than on) the stage, Lightning Bolt audiences were wearing professional ear protection long before free ear plugs existed. These guys are often called one of the loudest rock outfits in existence, ahead of the curve since day one and definitely in the category of “your favorite band’s favorite band”.
Lightning Bolt’s seventh full-length album ‘Sonic Citadel’ is the first to be recorded in a studio, revealing the solid structure of their tracks just that little bit more honor but leaving the virtuoso bass, frenzied drums, corrupted vocals and all other ragged edges as rough as 25 year ago. Gibson and Chippendale have become masterful musicians, but their energy is still so full of fluorescent youthful curiosity that both new and long-time fans are in for an intense trip.

How does one begin to describe dj. flugvél og geimskip? First of all, she’s not really a DJ, despite the name, which translates to DJ Airplane and Spaceship. Steinunn Harðardóttir is a polymath—a singing synth and drum machine wizard with an impressive visual arts repertoire. We speak through the magic of video chat as she relaxes in front of an ocean-themed mural in her artist commune, sipping both coffee and tea. Her cheerful temperament translates easily through the electronic space. 🤖🤖 !!! plus an afternoon trio with Moor Mother, Jamie Branch and Brian Chippendale at Le Guess Who? on November 8th! 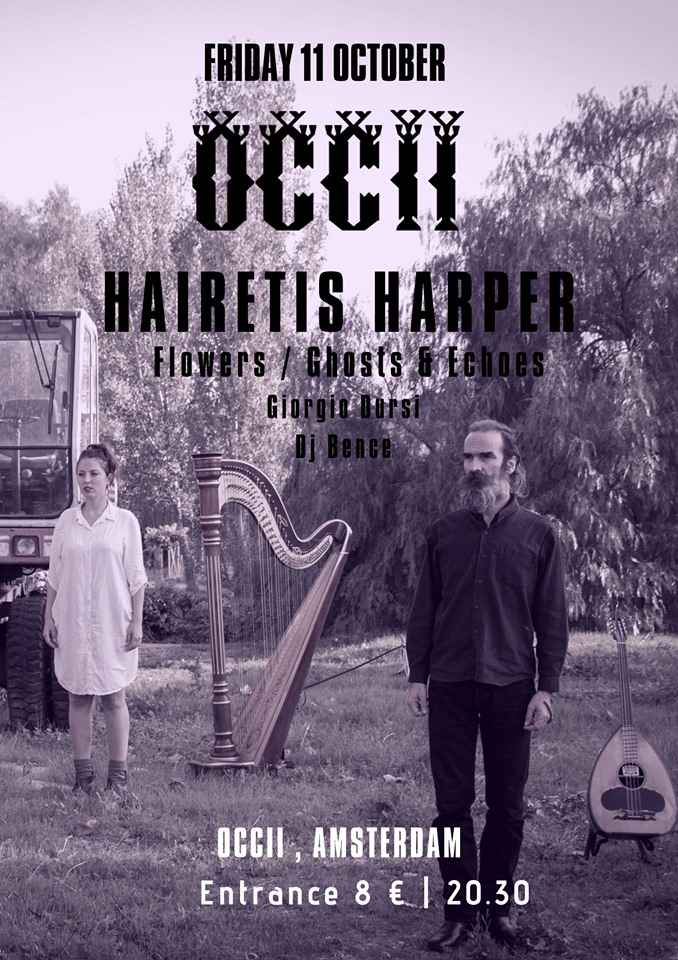 + + + +++ ++ ++++ + + Stephen Dedalus is Playing in Berlin at this in a couple of weeks. Day two of an 8 day epic mulitversal. All of it powered by BUSS: BIG UGLY SOUND SYSTEM. (WHY AM I SHOUTING? IF YOU COME BY YOU’LL UNDERSTAND).
#notprettyatall | #fuckshitupinthemoshpit | #nonoiseonadeathplanet | #maybemyarguementwillmakemoresenseifirunitthroughsomeofthesesickeffectspedals 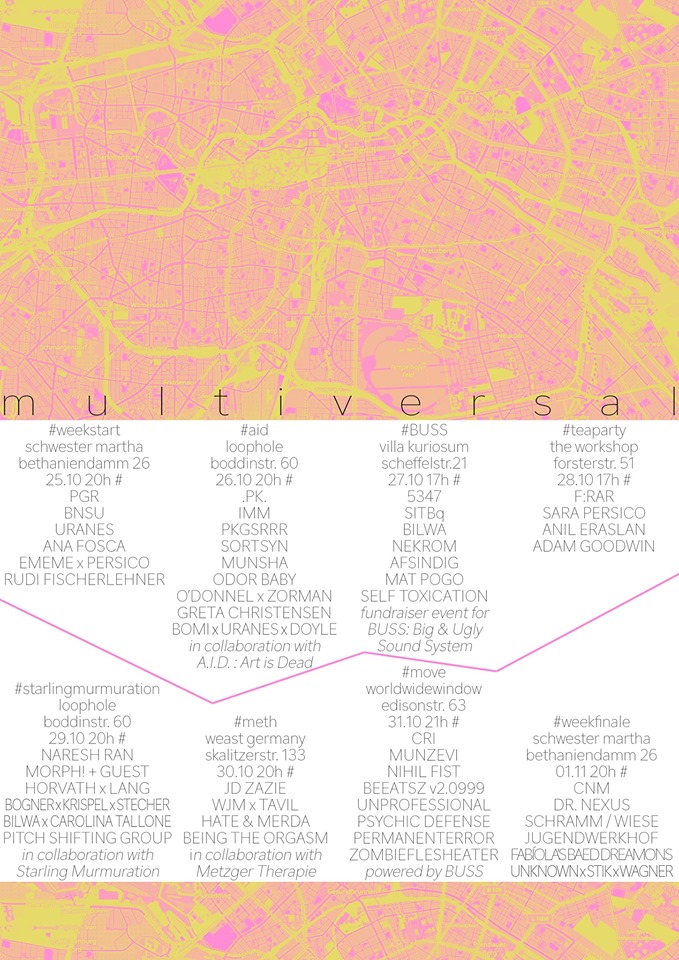 26.10 Multiversal #aid
20h in collaboration with A.I.D
at Loophole Berlin

Multiversal, on its 8th year of activity is happy to present you 8 days of consecutive series of concerts and performances within the spaces that over the years have proved to be be crucial for the sustainability of an independent, politicised and critical underground music and art scene in Berlin.
https://multiversal.site/post/188233082413/multiokt

Because it’s such a beautiful date, in spite of everything we’re going to celebrate life to the max on Green Tribe! 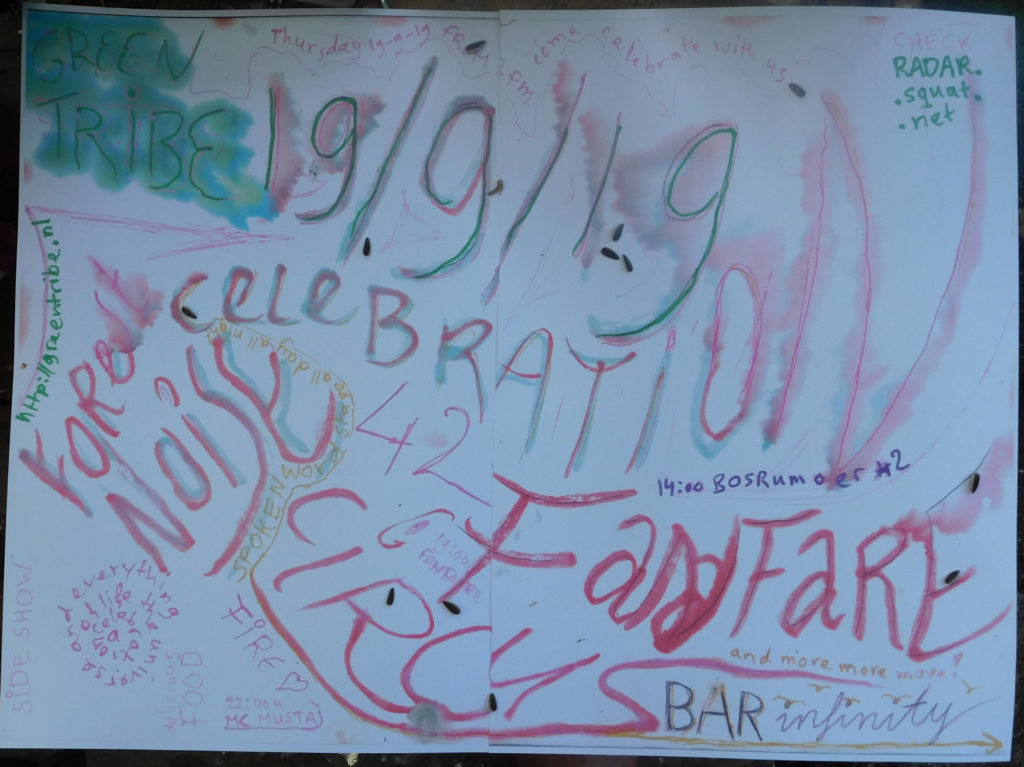 Price: free – all donations for the players!
online: https://www.greentribe.nl/