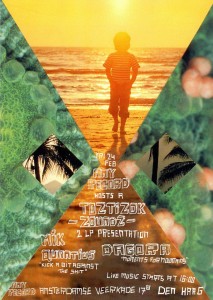 ANY RECORD will host a presentation of 2 new albums on TOZTIZOK ZOUNDZ by DAGORA and MIK QUANTIUS.
MIK’s first solo album with the title ‘Kick a bit against the shit’
and DAGORA’s debut, a double LP called ‘Moments for mountains’
will be presented by live sets from both acts.
Live music starts at 16:00

MIK QUANTIUS has an enormous vocal range and his diction is occasionally comparable to CAPTAIN BEEFHEART, but a little weirder. Reoccuring are the absurd sounds that fly out of his throat, often touching the treshold of pain. He is a scat maestro, who rather uses his body as an instrument than to sing. The thrilling sounds you will hear during performances of MIK QUANTIUS will remain in your memory for a long time.

DAGORA is a three piece free improvising group consisting of two drummers and a suitcase filled with self-built synthboxes and electro-acoustical instruments. The members go by mystical names as the wind, the rain, the thunder and the lightning, it’s the elements which currently represent them when they take their peek eye into future, past, present and other shapes of time and space during the act of their musical performances. Real and non-real unfolded when they traded their van for a space ship, ever since an interstellar trip has been underway for the mind and the body to other worlds they have not told you of…

TOZTIZOK ZOUNDZ
Fresh and happening label from Amsterdam, with their fingers on the controls they bring us the sounds of the new millenium.