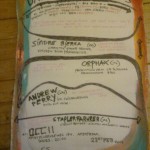 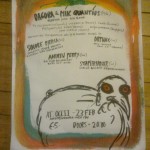 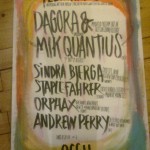 SINDRE BJERGA has been touring the UK every October for the last 5 years, as well as mainland Europe and even Russia and the Ukraine, with his cassette player drones and kitchen sink psychedelia… Splattering collisions between grey and grey, beware of drone fumes seeping into your brains… Armed with an array of tape players, dictaphones and a pile of less-than-glamourous sound debris from the sonic junkyards, he tries to juxtapose and melt sound ghosts hidden deep in the molten magnetic tapes, sometimes force feeding them with sheets of feedback from dying amps, always aiming for that mind-altering head trip…
Sindre has been recording and playing over 70 concerts together with Jan Iversen as the Bjerga/Iversen duo.
Has released about 100 records, solo, duo and in other constellations on labels all over the known universe.
Lately most of his records have been live recordings from his many concerts and tours around Europe.

ANDREW PERRY has had no idea what he’s been doing for a very long time. Distorted guitar, keyboard and voice in a democracy of the loudest.
Has a past in UK drone metal troupe Sunshine Repbublic, as a well as a (un)healthy interest in most things fuzz and metal.. oh and begian beer..
Runs the small label with the great name “We’re gonna get fucking drunk tonight boys”

By the end of this month there will be a new release out by ORPHAX, his first proper CD called “De Tragedie van een Liedjesschrijver Zonder Woorden”. On the CD will be 6 new pieces mastered by Jos Smolders at EARLabs

STAPLERFAHRER is the artistic moniker for Steffan de Turck, a Dutch sound artist from Tilburg in the Netherlands, who plays around with crunched and broken sounds, circuit bended gadgetry and electro-magnetic waves… and some weightlifting with powerbooks along the way.