Posted on September 3, 2013 by DATNAPOKU

Split single by Dylan Carlson of the Seattle-based band EARTH and Dutch free music drummer Rogier Smal. Each take a side. Carlson plays one beautiful riff throughout the whole A-Side. Smal plays an extensive drumsolo on the B-Side. Both sides are amazing. With artwork by Helena Sanders, this release is limited to 500 copies. Get your free copy at OCCII 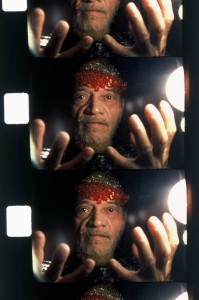 Marshall Belford Allen was born May 25, 1924 in Louisville, Kentucky. He started clarinet lessons at age 10.

By age 18, he enlisted in the Army’s 92nd Infantry (renowned as the Buffalo Soldiers), playing clarinet and alto saxophone in the 17th Division Special Service Band.
While stationed in Paris during World War II, he played with pianist Art Simmons and saxophonist Don Byas. Allen also toured and recorded with James Moody during the late ’40’s.
Upon honorable discharge, Mr. Allen enrolled in the Paris Conservatory of Music before returning to the States.
In 1951 Marshall settled in Chicago, where he led his own bands, playing in clubs and dance halls, while writing his own music and arrangements.
During the mid-1950’s, Marshall Allen met Sun Ra and became a devoted student of his musical cosmology.
After joining the Sun Ra Arkestra in 1958, Marshall Allen led Sun Ra’s reed section for over 40 years.
He is featured on over 200 Sun Ra releases, while appearing as special guest soloist in concert and on recordings with diverse groups such as NRBQ, Phish, Sonic Youth, and Medeski, Martin & Wood.

Allen assumed the helm of the Sun Ra Arkestra in 1995 after the ascension of Sun Ra in 1993 and John Gilmore in 1995.
http://www.sunraarkestra.com/