NZZN is a festival initiated by Vrooom and de player, in collaboration with Pantropical, Sandwich-Island, MiMa Rotterdam, Dr. Klangendum, Futura Resistenza, Pink Pank, and Koffie & Ambacht; the who’s who of Rotterdam based organisations operating on the fringes of subculture. These are the great artists performing on 4, 5, 9, and 11th of November on three different North-South locations!

NZZN (North-South-South-North / noord-zuid-zuid-noord) is a 4-day festival initiated by the above mentioned Rotterdam based organisations, in collaboration with Pantropical, Sandwich Island, Mima, Dr. Klangendum, Futura Resistenza, Pink Pank, and Koffie & Ambacht; who all operate on the fringes of the Rotterdam subculture. The festival highlights the network that is flourishing between these platforms; not merely to cement and emphasize the common grounds, but also to celebrate the creative nucleus. The small-scaled, decentralized events that take place in characteristic and sometimes unusual locations, are particularly beneficial for a lively, diverse cultural climate; just outside the defined city centre borders there is plenty of room for risktaking, experimentation and adventure.

NZZN seeks to map out and showcase this peripheral Rotterdam of leftfield music, sound art, improvisation, and performance art with a vibrant mix of international and local artists. The festival takes places in various locations in the North and South of Rotterdam. 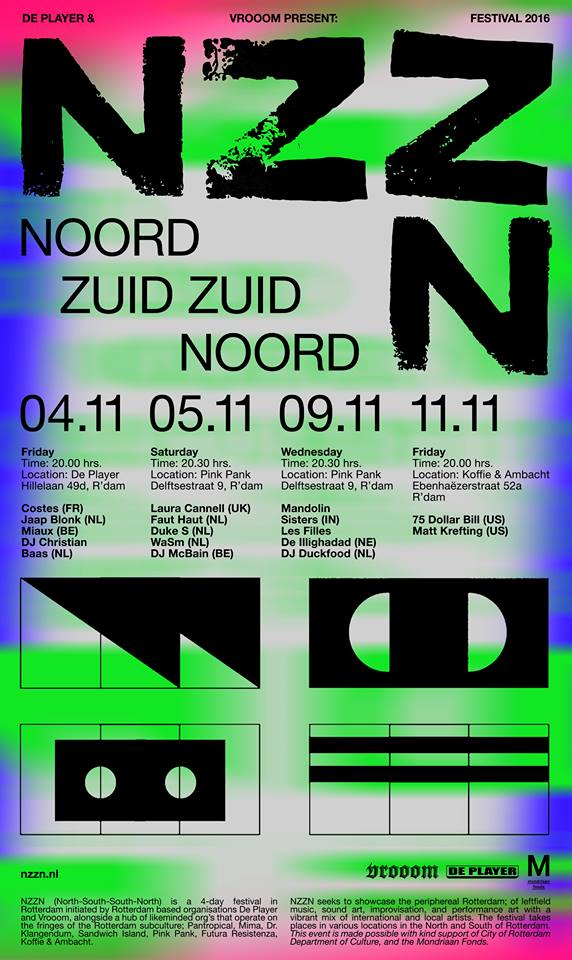 ¦ JAAP BLONK (nl)
Acclaimed self-taught composer, performer and vocal poet. At NZZN he will present ’Songs of Little Sleep’, his new project for voice and electronics. ’Songs of Little Sleep’ is a disturbingly engaging collection of songs on the topic of insomnia. The piece includes vocal sounds that tap into extreme ranges of extended vocal techniques. These are combined with electronics based on analog synth sounds.
www.jaapblonk.com

¦ LAURA CANNELL (uk)
Based in rural East Anglia, Laura Cannell is a live performer with a background in traditional folk, early and experimental music. She creates a solitary minimalist chamber music, where one player makes all the harmonies. She has the unique ability to conjure up transcendental and otherworldly atmospherics in all kinds of contexts. Her work draws on the emotional influences of the landscape and the sometimes dissonant chords of early and medieval music. With deconstructed bow and the extraordinary sound of double recorder, Laura’s music has grown out of unearthed fragments that became improvised pieces. Her music encompasses both wild animal calls and long forgotten liturgical fragments, which drawn through Laura’s music seem to originate from the same, ahistorical place. She is also a frequent collaborator with the likes of Richard Dawson (Vrooom #25), Rhodri Davis, Charles Haywood and Mark Fell.
http://www.lauracannell.co.uk/

¦ COSTES (fr)
Jean-Louis Costes is possibly France’s most transgressive and independent artist. A musician, singer/songwriter, performance artist, painter, writer, actor and director. His trashy, highly expressionist style is instantly recognizable no matter which mode of expression he adopts. Costes has released over 70 albums since 1986. His songs are a vehicle for very raw and explicit lyrics and music alternating between rock, pop and noise. He is renowned for his infamous “Porno-Social Operas”; an explosive mix of live music, theater, violent actions, sex, noise, chansons, romanticism, mysticism and social issues. In the late 1990s, he began publishing his own texts, and since 2003, has written four novels. Costes will bring a brand new show to Rotterdam; a hardcore theatrical guerilla performance about the clichés and archetypes of violent human culture.
www.costes.org

¦ FAUT HAUT (nl)
Great off-kilter pop band from Amsterdam whose poetic songs always seem to have some peculiar angle; with strong rhythms and somewhat cynical themes. This band clearly shows you why Dutch radio and tv imploded up its own ass, and has nothing meaningful to report anymore, because this band should’ve been topping the national charts by now.
http://fauthaut.com/

¦ LES FILLES DE ILLIGHADAD (ne)
Les Fills de Illighadad come from the scrubby Sahel desert of central Niger, the village of Illighadad, a tiny assemblance of mud houses. Fatou Seidi Ghali plays guitar and is joined by her cousin Alamnou Akrouni Fatou, a renownend vocalist in Niger. Together they play rural blues music; communal, emotive music that to seeks to entertain, comfort the sick, and be in balance with the radiant ambience of its surroundings. The days in Illighadad are long, time is not measured by hours but by the suns passage, the movement of the animals and insects. This is the first time Les Filles are performing outside Africa.
http://sahelsounds.com/tag/les-filles-de-illighadad/

¦ MANDOLIN SISTERS (in)
Since early childhood, the sisters Sreeusha and Sireesha from Chennai, India, have dedicated their playing to the electric mandolin, which was popularized by Uppalapu Srinivas in the 1980s. Encouraged by their musician father, the young sisters spent years training their technique and pitch perception abilities, devoting themselves to the mesmerizing sound of the five-string mandolin. The Mandolin Sisters belong to the Carnatic musical tradition which is one of the two main subgenres of Indian classical music associated with the southern parts of India, although it is also practiced throughout Sri Lanka. Not new to the game, the remarkable mandolin sisters have given roughly 2000 concerts in India and abroad throughout the years. Their electrifying performance will make jaws drop.
http://mandolinsisters.com/

¦ MIAUX (be)
Armed with a Casio and exceptional song writing skills, Mia Prce’s music is minimal and timeless. It sits somewhere between Roedelius, Ruth White and electronic realisations of Baroque music. The general gloom Miaux spreads on her sandwiches is darker than early Tatort and could replace any soundtrack of a Fassbinder movie. Her music is melancholic, like if Neu’s instruments were stolen on tour and replaced with one casio with a red lamp buzzing “low battery”. At NZZN Miaux will present her new album “Hideaway” which will be released on Ultra Eczema in November.
https://miaux.bandcamp.com/

This event is made possible with kind support of City of Rotterdam Department of Culture, and the Mondriaan Fonds