A completely pointless killing of time (MRR, How High The Moon) 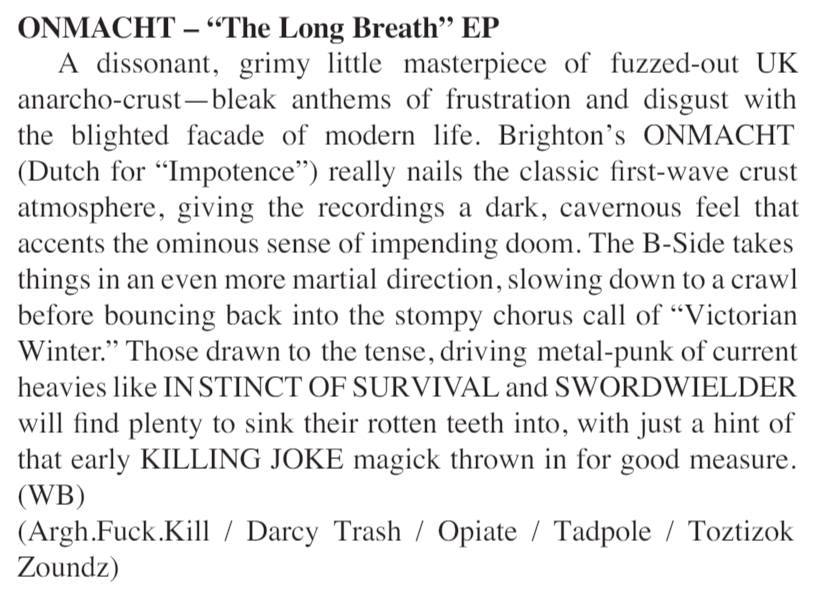 Over Only Punk Is Real
A completely pointless killing of time; posting bangers, pogoing to tunes, talk of no future and running down back streets; here they come…lalalalala…

Impressive free jazz team-up on Wood Moon (JVTLANDT JVT0016 / TOZTIZOK ZOUNDZ TOZ017) – it was a one-off meeting between the Dutch drummer Rogier Smal and the Japanese saxophonist, Ryoko Ono. Ryoko Ono is a new name to me but I’m very impressed by her fluent playing and uncluttered style; she gets on with the job at hand and makes “high energy” music seem like something she could do without breaking into a sweat, executing complex moves with ease. Her press points to her interest in several forms of music outside of jazz, including free improvisation and avant-garde noise, which is the kind of claim made on behalf of many a cultural omnivore these days. But Ryoko Ono, I learn to my advantage, has a history of adding her sax work to LPs by Acid Mothers Temple, and other unusual latterday Jap-psych records, such as releases by Atsushi Tsuyama, the zaniest member of Kawabata Makoto’s ever-changing collective. I’m now intrigued enough to start looking for records by Psyche Bugyou, whose output has strangely enough passed me by. Experimental skittery brush-work drummer Smal is also new to me, but anyone who makes a record with Dylan Carlson and has played alongside Eugene Chadbourne is welcome in this humble abode.

Wood Moon for the most part resembles John Coltrane for me, particularly some of the cuts on 1960’s all-time classic Giant Steps, except that Ono does the overblowing and sax-screaming thing with an incredible perfection – almost too perfect, in places making her performances verge on the synthetic, and I’m amazed at the way she can regain balance with such sangfroid after performing a series of near-impossible acrobatics with her horn. It’s kind of a samey sounding record too, most likely recorded at a single session, but for the presence of Track Four where we hear some of Ryoko’s charming vocalising, which she’s apparently able to do in between puffs on the sax. I’d have gladly paid double for an entire album of this surrealist jibber-jabber, where she appears to be possessed by a friendly Japanese demon. From 30 March 2016.
Ed Pinsent @ The Sound Projector