10 November … a recording session in the amazing acoustics of St. Margaret’s Church in Whalley Range, Manchester… ((Do bear in mind this will be a recording session rather than a live performance: alot of the time boring stuff like guys sitting around with headphones on could be happening, other times you might hear amazing music, a lot of time quiet might be required… I’ll make sure there’s refreshments!  Donations of £4/£5 will be happily accepted.))

19 November at THE FALK

What happens when music, film and poetry collide, strained through the Saturnian influence of Sun Ra? CINEMA SOLORIENS is what happens, a multimedia AV performance of moving images set to a largely improvised soundtrack. The creation of James Harrar, a multi-faceted artist with expertise in film and music, and Marshall Allen, former leader of Sun Ra’s Arkestra, Cinema Soloriens checks in at MelloMello on 8th and 9th November as part of its inter-planetary journey, which is celebrating its 20th anniversary this year. The two days will consists of exhibtions of original artwork and portraits, archival footgae of Sun Ra, a Q&A and workshop with Marshall Allen, and collaborative live performances from Paddy Steer, Mugstar and Dead Hedge Trio. Attendees are encouraged to bring their own instruments.

Ahead of this unique show we thought it would be a good idea to pit the wits of Cinema Soloriens’ creator James Harrar against those of the brains behind Carnivalesque, who recently staged an epic celebration of all things Sun Ra for the Space Is The Place event in August. And it turned out to be a good battle of wits: here’s how the conversation went…

Carnivalesque: How is the tour going?

James Harrar: Cinema Soloriens is a multi-media performance consisting of my experimental and highly personal film and video images with a live musical rendering of soundtracks for each film. With me, Marshall Allen and Rogier Smal complete the core of CS.

C: Could you elaborate a little about the philosophy behind Cinema Soloriens?

JH: The project places attention on artist collaboration, exploring the moving image with live performance. When combined, an attempt is made to reveal deeper levels of interpretation within the visceral film poems. These presentations also celebrate the early beginnings of cinema, providing live music to support and elevate the movie experience.

C: You’re both a film maker and musician, is there a methodology in your approach to create a dialogue between film and the soundtrack?

JH: For me doing this project is about sharing, and learning about myself through making connections with others. It’s also important to me that the people involved are sharing and learning about themselves in this exchange. Sometimes I see the entire film in my head, I see the complete structure and I just need to collect the shots/imagery. Other times I shoot the footage and it reveals itself to me in the editing process, and I sort of chisel away at it until I get to the finished work. Sometimes I have a visual concept of where I’m going, but I’m in a process of discovering a language that I am learning how to articulate.

The project is also not just about me sharing, it is also important that the viewer be involved as they too are learning about themselves in this exchange. Everyone brings something different to the Cinema Soloriens experience.

If an audience can trust me, they need to be prepared that there is a level of intimacy gently imposed on them as they watch my films. I’m opening up to them, and they need to open up in return. My images are strangely familiar images: thoughts and feelings we are trying to understand, all being relayed to the audience in a pure form of sound and vision.

C: Does sound inform your films and/or vice versa? (I’m thinking in particular to the example of Miles Davis’s approach to the soundtrack for Lift To The Scaffold, improvising to a screening of the film to create a score).

JH: I make the films without any thought to them having sound. My imagery always has an inherent musical quality. That’s my style. Cinema Soloriens is an extension of my film-making. Having a live musical interpretation of my films allows the audience a full sensory experience.

Like us, the art is always changing, growing, aging and my relationship with it changes as well. When I look at my early work I see a young idealist, highly sensitive to nature, trying to develop his language of visual poetry. As I get older, maybe I’ve become more proficient in that language.

I don’t think the core meaning of my films have changed over time. It’s just with more life experience I’ve developed a better understanding of the work. My work has always centered around several common themes: spirituality, nature, beauty, magic, perception, ritual, alchemy, sensuality and poetry.

C: How did your world collide with Marshall Allen’s?

JH: When Sun Ra died in 1993, I made a silent film, For Sun Ra. The movie was a visual meditation on his music, and I dedicated it to him. I attended a Sun Ra Arkestra performance with John Gilmore as the leader, and after the show I offered to buy Marshall Allen a drink and we started talking. He asked me what I did, I told him about my film making, and about the recent Sun Ra film. He was very interested and wanted me to come by the house and show it to him, which I did. While viewing the film, Marshall immediately saw the musical structures within the silent film, and was singing to it and voicing rhythms, even suggesting a particular Sun Ra composition (Sleeping Beauty) that would go perfectly with it. We discussed that he could make a music soundtrack to that film and maybe some others.

I can’t say it enough about how privileged I am to spend 20 years on this project I started with Marshall, to be a dedicated student of his and close friends. We have profoundly influenced each other in how we see the world and even approach our creative endeavours, all while having so many incredible adventures. Joking with him I say I do Cinema Soloriens performances all over the world for the food/drink, but really it is so that I take my special friend with me all over the world and eat great food together! I love and dig Marshall very much, he will always be an important part of my life and family.

C: Has your collaboration with Marshall subsequently adjusted your approach to work as a visual artist and has your work affected Marshall’s?

JH: There have been subtle nuances that have trickled into our work since we have been collaborating. With Marshall conducting the Arkestra, I hear more vocals and spoken word recitations. For both of us musically, we have this evolving rhythm and strange groove, almost a prog sound buried in the improv pieces.

C: I read that your Native American name is Thorrshunn which means rising sun, how does this tie in with the project moniker of Cinema Soloriens?

JH: My mother and I are Tiwa. She was raised on the Isleta Pueblo Reservation in New Mexico. Being Native American and possessing a unique cultural identity has had a profound impact on my image making as much of the films are steeped in ritual, trance, meditation, mythic tales and nature.

C: Is there anything else you’d like to mention about the project before landing in Liverpool?

JH: It’s a 20 year celebration and our first time presenting in Liverpool. There will be a photo exhibition, showcasing the past two decades of Cinema Soloriens, a music workshop and full Cinema Soloriens performance with special guests. Expect to have a great time with this multimedia event. 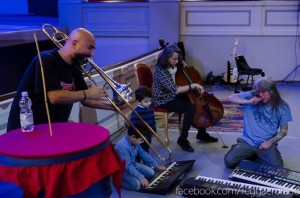 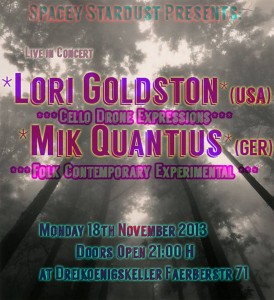 Lori and Mik met each other while playing music and touring the continents. This month we have the chance to see and hear them live at legendary Dreikönigskeller in Frankfurt. Take the chance while you can and join a special journey of sounds scapes with Lori Goldston playing exclusive Cello Expressions with some tastes of Drone bits on top. Tastey sound for your Eares and for your Eyes another Bonbon of the night will be the performance of Mik Qunatius with his unique and extravaganza style of singing along the sories of his mind.

Check http://lorigoldston.com/SHOWS/ for more shows and details, some gigs are with Mik, some with other beautiful people like for example Vratislav Brabenec and Josef Karafiát of the Plastic People of the Universe!!!

Raaskalbomfukkerz news:
We are making a new (vinyl) 10″ record, working title: Karkas van Kleddernat
with Jas Min on Kora and Ýûrkï Jerke on Piano and some of the handmade instruments provided by the kids of Kinderpret, Occ InIt.

Out hopefully spring next year!